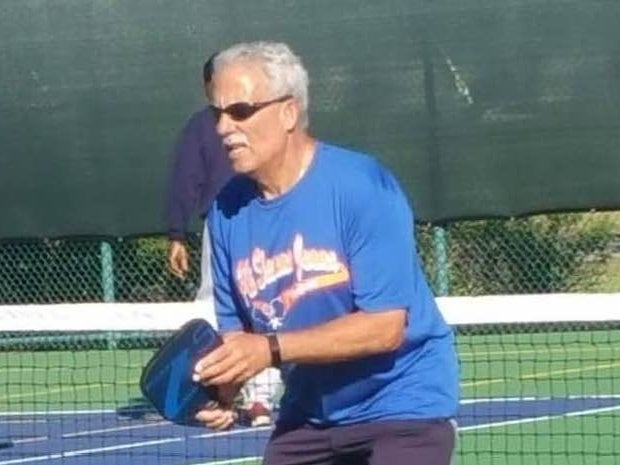 SOUTHAMPTON, NY — For years, Vinny Mangano has been a force on the Southampton canvas. A longtime high school math teacher and football coach, Mangano, 64, now retired, keeps in shape with frequent pickle ball games at the Southampton Youth Services recreational facility. While there, Mangano, well-known for his years as an EMT, often shoots the breeze with SYS Director Scott Johnson — the two, both high school coaches, share a longtime friendship and camaraderie. And on Nov. 30, in a dramatic rescue, Johnson, along with two other staffers, saved Mangano’s life after he collapsed on the pickle ball court.

Johnson and his quick-thinking SYS staff jumped into action to rescue Mangano. Johnson rushed to get the AED — the portable electronic device automatically diagnoses life-threatening cardiac arrhythmias – staff member Evan Gravano called 911, and Amairani Hernandez administered CPR. One shock treatment was delivered by the AED, and, thanks to the “rapid and amazing action of the SYS staff,” Mangano was revived and conscious by the time the ambulance arrived, town officials said.

Johnson said Mangano was playing pickleball when suddenly, “he went down.”

Mangano collapsed after his heart “short-circuited” due to an electrical issue, Johnson said; the AED “did the trick,” and got his heart beating correctly again.

The save was Johnson’s second. He’d also used an AED about 17 years ago when he had just been trained.

Mangano, known for his athletic prowess, is a “pickle ball ambassador” in the community, spreading the word and enlisting new participants in the sport, Johnson said.

When Mangano collapsed, Johnson said: “I was really surprised at who it was. He’s in tremendous shape — always biking, hiking, everything you can possibly imagine.”

When he saw that he’d had a medical incident, Johnson said he sprang into action. “When you are saving a life, you have to react. You have time to be scared. You just do what you have to do,” he said. “But after that adrenalin leaves you, you’re like, ‘Damn, what just happened?'”

Johnson knew Mangano hadn’t had a heart attack because he regained consciousness quickly, he said. “He woke up and was talking to the EMTs. We fist-pumped. But I don’t think he remembers.”

Mangano has no recollection of that fateful moment that might have ended his life. But in a series of ironic twists, the man who has spent a lifetime looking out and caring for others found himself saved by a trio of hometown heroes whose rapid-fire action meant the difference between life and death.

Mangano said he’s always been in shape and had just been to the cardiologist two weeks prior to the incident; he was fine, he said.

On that Monday, Mangano said he suffered cardiac arrest due to ventricular fibrillation caused by an electrical short circuit. “My heart stopped beating normally,” he said. While he was unconscious, it was the efforts of the trio that saved him, he said. “The CPR and AED worked perfectly and they were able to get me back,” Mangano said.

He doesn’t remember anything because not only was he unconscious after the cardiac arrest but when he fell, he hit his head hard and had a mild concussion.

Mangano was brought first to Stony Brook Southampton Hospital for tests and then, was sent to Stony Brook University Hospital. “Ian King, one of my former students, was one of the rescuers,” Mangano said.

At Stony Brook, he underwent a battery of tests to ensure there was no blockage; a defibrillator was put in, and he was released that Thursday, just three days later, Mangano said.

Of the experience, he said, “It was absolutely amazing.”

On Tuesday, Mangano said he was feeling “really, really good,” and is currently on a regime for those who’ve suffered heart failure. He’s back to his brisk walks at SYS and is expected to be back on the pickle ball court by late January, he said.

Literally being brought back to life has changed everything, Mangano said. He moved to Southampton in 1978 and the many friends, students, coaches and neighbors he’s impacted in his years of service have come forward in an outpouring of love.

Mangano thanked his wife Sally and children Tommy and Ann Marie for rushing to his side.

The experience, he said, has been life-altering.

“This has shocked us all,” Sally added. “Vinny has always been in top shape. We never anticipated any of this.”

A former varsity coach, Mangano has been certified in CPR since 1975 and became an instructor in 1990, sharing life-saving skills with thousands of coaches and residents on the East End. He served as an EMT for eight years with the Southampton Village Volunteer Ambulance; in another coincidence, it was SVA that rushed to his aid after he collapsed.

In fact, Mangano himself had a CPR save — also a man playing pickle ball who suffered cardiac arrest. “We got the AED, two of us performed CPR, and we brought him back. He’s still playing pickle ball. It was a full circle kind of thing,” he said.

Having saved a man himself, Mangano realizes how rare those saves are, how perfectly all circumstances must align for a positive outcome. “It was amazing,” he said. The man and he have now become friends, he added.

Southampton Town officials said there are many AED devices located at SYS. “We can’t emphasize enough the importance of having an AED device on hand at a facility like this. The presence of the AED and a staff trained in CPR can make the difference between life and death,” said Ryan Murphy, town code compliance and emergency management administrator. The save was the second with the AED at SYS; the first was successfully performed many years ago.

Mangano and his wife wanted to thank the three who saved him profusely for the gift of his life.