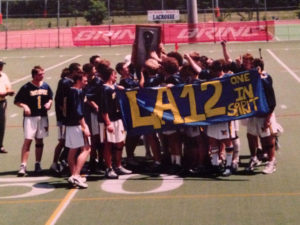 Louis Acompora died on March 25, 2000, from a condition known as commotio cordis while playing lacrosse during his first high school game. He was only 14 years old. Louis, a goalie who was wearing a required chest protector, blocked a routine shot with his body that resulted in a lacrosse ball striking his chest directly over his heart. In a millisecond his heart was thrown into a lethal abnormal heart rhythm called ventricular fibrillation, or VF. VF causes a useless quivering of the heart that results in a complete cessation of circulation.

Instantly, his brain and other vital organs were without circulation and oxygen. Within a few seconds, he collapsed to the ground. Most observers initially suspected that he was recovering from the discomfort of the blow. To the shock of the coach, bystanders, and his parents, Louis was unconscious, not breathing, and had no pulse. Rescuers at the scene administered cardiopulmonary resuscitation (CPR). However, defibrillation was not administered for well over 12 minutes following the collapse. Attempts at resuscitation were futile and Louis died.