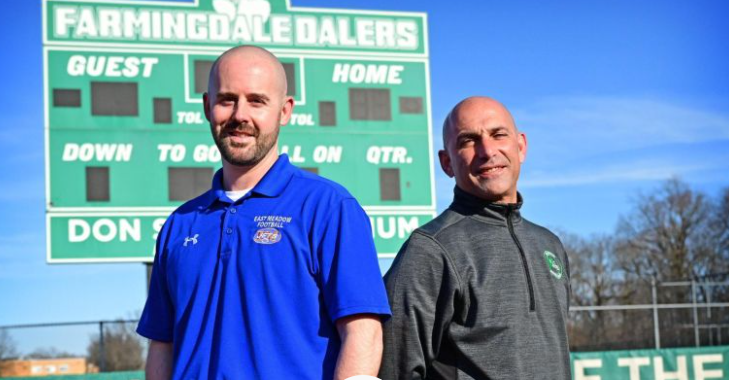 Nassau County high school football official Phil LoNigro collapsed on the field while working the second quarter of the East Meadow-Farmingdale varsity football game on Saturday, only to be brought back from having no pulse with a shock from a defibrillator by East Meadow athletic trainer Dan DeSimone and Farmingdale athletic trainer Phil Fandale.

While resting at Winthrop Hospital in Mineola, LoNigro, 59 and a volunteer medic himself, hailed the men who saved him. “I thank God for those athletic trainers, they saved my life,” said LoNigro, who has officiated for eight years. “They said they zapped me with the defibrillator to bring me back. I was fortunate to have a lot of support at the right time. This is a perfect example of why the defibrillators have to be available at all athletic fields.”

Midway through the second quarter, in between plays, LoNigro, working the umpire position in the middle of the field, said he remembered being warm before he collapsed. “Everything went black and the next thing I remember is opening my eyes and hearing all these people yelling at me,” LoNigro said. “They were obviously working on me.”

DeSimone got to LoNigro first and said he wasn’t alert. Fandale went out with the defibrillator.”We called his name, no response,” Fandale said. “We tried to assess him more, flipped him over, and found no pulse. We ripped off his shirt, cut off the undershirt and Dan started doing chest compressions. We saw his face changing colors and he appeared to be overheated.”

“He used the AED and after one shock brought him back,” said DeSimone, who then continued chest compressions. “We knew what we had to do. It’s one of those things where you just jump into action and all of the training kicks in. We knew what we needed to do to get the referee back to life.”

Fandale said LoNigro was unclear about what happened to him as they loaded him into the ambulance for transport to St. Joseph’s Hospital in Bethpage. He would be relocated to Winthrop on Saturday evening.

“He was still disoriented when he came back but he was back to breathing and talking and that was the goal,” Fandale said. “That was just unbelievable. It was the first time in my 22 years at Farmingdale I’ve ever had to use the AED or do CPR on anyone.”

Farmingdale football coach Buddy Krumenacker said he watched the official collapse and during the 20-minute halt in the game thought he was very lucky to have the emergency personnel there.

“He crumbled and just slowly fell to the turf,” Krumenacker said. “All that kept going through my head was timing is everything. He was in the right place at the right time. Two trainers, a doctor, ambulance, defibrillators, the setting was perfect to save his life. If that had happened in a parking lot at Home Depot, I think he’d be gone.”

“A lot of people came to his aid and did a tremendous job saving his life,” Krumenacker added. “Everybody from the trainers to the ambulance crew, everybody was very much on it, very calm and took care of him. They did a great job saving his life.”

LoNigro, a 1980 graduate of Farmingdale High, lives in Farmingdale and is a retired Nassau County correction officer. He now is a freelance photographer and also is a volunteer medic at the Farmingdale Fire Department.

“I was told I may have been a little bit overdressed and overheated and that may have caused dehydration,” LoNigro said Sunday afternoon. “My magnesium and potassium was very low, which can send you into all different types of arrhythmias. Which is why the AED did exactly what it should have done and put me back into my normal rhythm.”