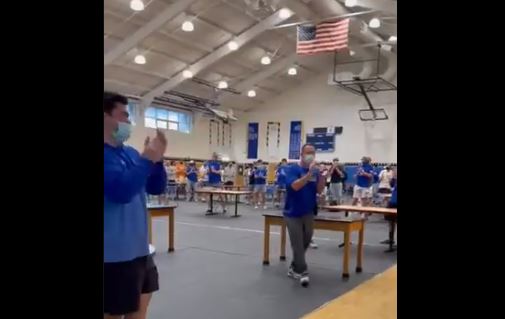 Loyola Blakefield lacrosse player Peter Laake, who was struck in the chest with a shot in a game against McDonogh on Friday, is doing well and may be released from a hospital Saturday following further tests, according to Dons coach Gene Ubriaco.

The freshman defenseman was taken by ambulance to an area hospital after receiving emergency care at Loyola’s Hargaden Field.

According to Ubriaco, Laake suffered commotio cordis, which is a disruption of heart rhythm that occurs as a result of a blow to the area directly over the heart at a critical time during the cycle of a heart beat.

“Commotio cordis was the injury,” said Loyola athletic trainer Jeremy Parr. “He is alert, conscious and in good spirits today. He is still under observation at the hospital, awaiting some final diagnostic tests to return to baseline before being released. The Family is grateful for the amount of community support.”

In addition to Loyola Blakefield’s training staff, two doctors came from the stands to assist with an automated external defibrillator (AED) used on the field before a Baltimore County medical team arrived to render further care.

The incident took place late in the first quarter and the game was suspended at that point.

In 2000, 14-year-old Louis Acompora, a freshman lacrosse goalie for Northport High School in New York, died from commotio cordis after making a routine save in a game. The Louis J. Acompora Memorial Foundation has worked to raise awareness among schools and other public institutions about the importance of owning automated external defibrillators.

US Lacrosse has worked with manufacturers and lacrosse leagues to develop lacrosse gear to protect the chest area for players. Goalies are typically the only players who wear full chest protection. Defenders are often subject to getting hit with shots of speeds near 100 mph.