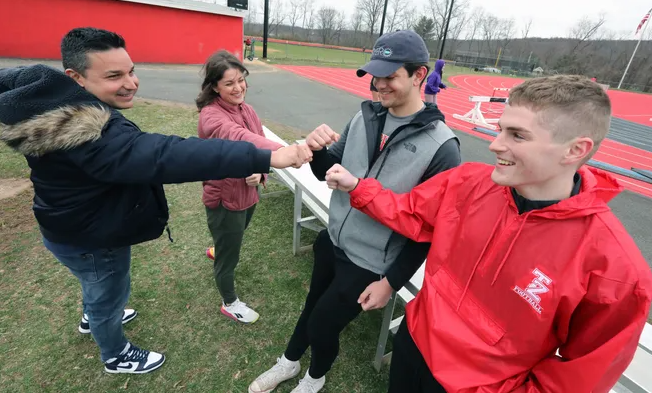 It’s unlikely any save made this season will be as timely.

Jimmy Sanchez and Jess Lappe were exactly where they needed to be Tuesday when an official working a high school boys lacrosse scrimmage at Tappan Zee High School collapsed on the field.

It took a well-executed game plan along with a well-placed automated external defibrillator to prevent a tragedy.

“Somebody had just scored a goal,” said Sanchez, a New York City Fire Department lieutenant who serves on Engine 34 in Manhattan’s Hell’s Kitchen. “The ref grabbed the ball and was jogging to set up the faceoff at midfield, and it seemed like he tripped. I left the stands and hopped over the fence. His breathing was labored when I got to him and there was an irregular heartbeat. I yelled that we needed equipment to do rescue breathing and the next thing I know Jess had come along.”

Lappe is the full-time certified athletic trainer at Tappan Zee.

“I had two senior seminar students with me, Christian Florencia and Matt Irizzary, both athletes,” she said. “They might be thinking about kinesiology, athletic training or physical therapy in college so they were shadowing me and I had just given them a rundown of where everything was. I knew what it was right away when the ref went down. It’s only one of two things. He either had a stroke or a heart attack. The boys called 911 and got the AED and, thank God, the right parent was on the sideline.”

Tappan Zee has numerous AEDs on campus, including one that is kept steps away from the main field

Sanchez hooked up the machine while Lappe began chest compressions.

“I had checked his pulse one more time and felt nothing,” Sanchez sad. “Jess had gone through a couple of cycles of CPR while the AED was analyzing. She got a breathing mask on him, too. The AED gave him a shock and his pulse came back and before you knew it, EMS was there. When they got him on the stretcher, he was sitting up, and he was almost alert. This guy, you thought he was coming right back to the game after he got done at the hospital.”

Sanchez estimates the referee went some 90 seconds without a pulse.

“He was gone for a little bit and came right back,” added Sanchez, who has two sons on the varsity lacrosse team. “Rarely do I see that. The guy was lucky the AED was right there and everyone reacted so quickly. It was a perfect scenario. I’ve been to 50, 60, a hundred CPR calls, probably, and only seen one person before this make it.”

The referee was transported by South Orangetown EMS to Montefiore Nyack Hospital.

“I got a call today from an EMS friend who spoke with the doctors and told me he was doing well,” Lappe said. “The greatest moment was when he sat up and smiled. I was just, ‘Oh my, God,’ that was something I’ll treasure and remember for the rest of my life. Everyone says the same thing: It’s very, very, very rare when that happens.”

The campus was still buzzing on Wednesday.

“I’m not surprised,” Tappan Zee athletic director Bill Pilla said. “Jess is awesome. She goes above and beyond all the time and she’s got ice in her veins, no doubt about it. She was made for this job. I am such a proponent for having a full-time certified athletic trainer in each school. Having somebody here yesterday saved a life.”

Lappe was quick to deflect credit to Sanchez, Florencia, Irizarry and others.

“The only thing I can take credit for is the fact that I was prepared,” she said. “That is the No. 1 job of an athletic trainer and that day I was prepared. You have to have an emergency action plan. Where are the AEDs? I like to make sure we have one near each field. What gates have to be open? Everything was done right. Mr. Sanchez and everyone involved did their job flawlessly, right down to safety and security director, John Gulino, who checks our AEDs every single month. That’s super important, although I hope to never use one again in my career.”

Several parents with CPR training came down to the field, as well, in case they were needed.

“We are family at Tappan Zee,” Lappe said. “Anytime someone is in need everyone jumps in to do what they can. It was a huge team effort.”