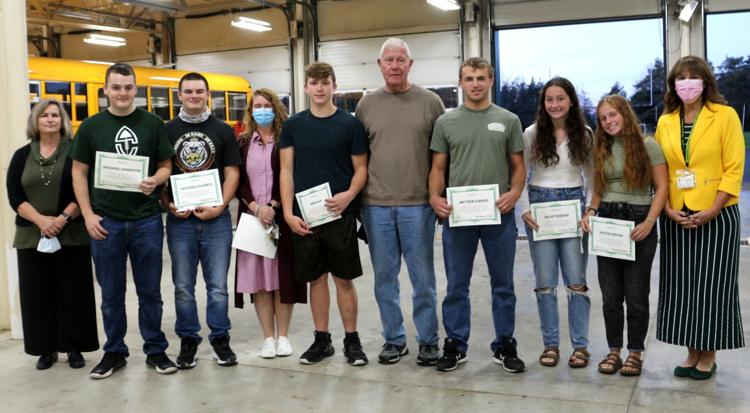 ALLEGANY — It was just over a year ago that an Allegany-Limestone sophomore suffered a heart attack while lifting weights in the weight room. The student, who was revived by fellow students as well as staff using CPR, and then by a nurse using an automatic external defibrillator (AED), recovered enough to return to school two months later. On Tuesday night in the Allegany-Limestone school bus garage the student and staff heroes of that day were recognized by the Allegany-Limestone Central School District. Members of the Board of Education also attended the ceremony. Middle-High School Principal Kimberly Moore presented certificates to nine of the 10 of those who participated in that day’s lifesaving activities. The certificates went to students Kelsie Riordan, Peyton Fortuna, Josh Lea, Matt Giardini, Seth Tarbox, Nathaniel Goldsmith and Nathaniel Harrington. Melisa Rakoska, nurse Cheryl Wintermantel and coach Dale MacArthur also received the certificates.

The stricken student’s friends were the first to recognize something was wrong and alerted Rakoska, who supervised the weight room. Students who were trained in CPR began performing it on their friend. Rakoska called 911 and directed another student to get Cheryl Wintermantel, the school nurse, and told her to bring an AED. Another student went outside to direct the ambulance crew to the right location. District Superintendent Anthony Giannicchi said the student, who did not want to be identified, transferred to another school district. Moore, who ran to the weight room when she was alerted of the medical emergency on Oct. 17, 2020, recalled hearing the beeping of the AED machine. Rakoska and the students performed CPR until the nurse got there with the AED machine. As a result, she added, many more students have asked to be trained in CPR. Several staff members have now been certified to teach CPR.

Moore said she asked everyone who played a part bringing the medical emergency to a successful conclusion. “It was life-saving that so many students knew CPR.” Several students have continued to keep in touch with the student who was saved, Moore said. “His family has been very appreciative to everyone involved.” “You saved someone’s life that day,” Moore said to those gathered for the ceremony. “You literally saved someone’s life. Thank you so much.” Moore presented each person with a certificate thanking them for their actions that afternoon a year ago.