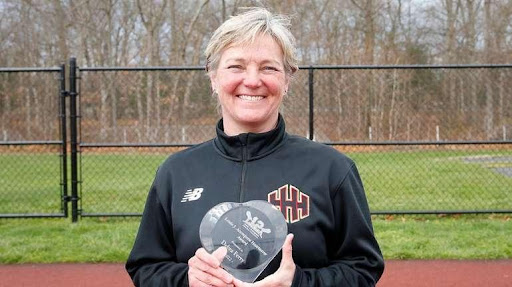 Joe Varlack was stretched out on his back in the stands, in cardiac arrest. He had no pulse.

This was Feb. 26, halftime of the Half Hollow Hills East-Brentwood boys basketball playoff game at Eastport-South Manor. Varlack came to watch his son, Derek, and his Hills East teammates. But this 50-year-old man was laying there now, caught in a life or death moment.

Skip ahead to Saturday morning, to halftime of Northport’s 9-2 win over Half Hollow Hills in a boys lacrosse game at Hills West. Joe Varlack stood on the field for a ceremony with some of the people who helped him survive that moment 42 days earlier.

“I feel great right now,” Varlack said shortly before walking out there.

To his left were Karen and John Acompora, who lost their 14-year-old son, Louis, on March 25, 2000. There was no automated external defibrillator (a.k.a. AED) at his event. He was a goalie playing his first high school lacrosse game for Northport’s freshman team, at West Islip. His heart rhythm was interrupted by a shot he blocked, leading to sudden cardiac arrest.

His parents created the Louis J. Acompora Memorial Foundation, which raises awareness and funds to supply AEDs, does heart screenings and teaches CPR, among other things. They also pushed for what became known as Louis’ Law.

Varlack received recognition at the ceremony as the 106th person saved by the 2002 law. It mandates AEDs at New York state public schools and sporting events.

“They turned a horrible tragedy in their life into something extremely positive,” said Ferry, who was Louis’ physical education teacher.

It took a good while for EMTs to arrive at ESM. But Varlack had already been revived. Bucco put the pads on his chest, and the AED did its work. He had an internal defibrillator implanted a few days later.

“It was absolutely essential because the amount of time with the arrest correlates directly with outcomes,” said Dr. Nicolas Raio, his cardiologist.

The on-site reaction was quick.

Ferry yelled for Bucco, then assisted her. Bucco assessed. When she felt no pulse, she wanted the AED. The host school had one. But Bucco had brought one. She had Hills East student-athlete Alyssa Studdert run it up to her.

Danette Varlack, Joe’s sister who’s a nurse, performed chest compressions. Bucco tried mouth-to-mouth resuscitation. Then he came to after the first shock from the AED.

“I guess what it means is that I was fully prepared for my job and did what I had to do,” Bucco said of her role in saving a life. “I’m a believer that things happen for a reason. I was there at that time, and I’m lucky I was able to do what I could to help him.”

Asked about the foundation’s mission now, Karen Acompora said, “There are still other entities in our state and nationwide that don’t have AEDs.”

But she saw Varlack’s survival again show the impact of Louis’ Law.

“Honestly, you do kind of hear that word ‘bittersweet,’ but it is and isn’t,” she said. “We are so grateful that our son has left a legacy of lives being saved and other families haven’t had to go through what we had to go through when their loved one comes back and they’ve gone on to live healthy, productive lives.”