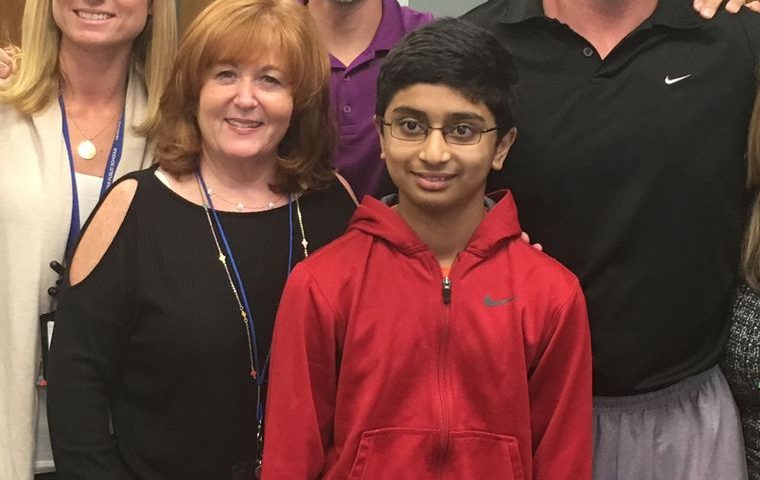 Sanketh Kumar turns 13 next Friday, a month to the day after he had a heart attack during gym class at Herricks Middle School.

Sanketh doesn’t remember that day, but he and his parents credit the quick thinking and coordination of seven school teachers and administrators with saving his life.

“It feels like they did a lot to keep me alive, so I’m grateful,” Sanketh said on Thursday, his second day back at school after three weeks.

Sanketh was finishing his first outdoor warm-up lap on the morning of Sept. 14 when physical education teacher Artie Friess saw he had collapsed.

Teacher Joe Welsh sent the 60 other students inside and called the school nurses, an ambulance and school principal Joan Keegan.

Tracey Baumann, the first nurse to respond, said she was “extremely alarmed” to find Sanketh with a weak pulse. By the time nurse Dana Liberman got to the scene, he wasn’t breathing and she could not find his pulse.

Keegan and health teacher Pam Seebald went inside to find a defibrillator while the others outside kept trying to resuscitate Sanketh. Seebald found one and rushed back outside, where Lieberman gave Sanketh one shock to restart his heart.

“We could see his heart, right there,” Lieberman said. “It was the best scene of the day that his heart was beating.”

The episode only lasted about eight minutes, but it “felt like an eternity,” Seebauld said.

An ambulance arrived and took Sanketh to Winthrop-University Hospital in Mineola. He was transferred to New York-Presbyterian Hospital a few hours later.

Sanketh’s parents, Gopal and Achala Kumar left work to meet Sanketh and the ambulance at the hospital after getting a call from the school, Gopal said.

“When you think about how many people were involved in this, and you’re dealing with a situation that even seconds are so vitally important, everybody worked really, really well together,” Welsh said.

Sanketh now has a fibulator, a device that shocks the heart back into a regular rhythm, and has at least six weeks before he can take up physical activity again, Gopal Kumar said.

The incident convinced Gopal of the importance of having defibrillators in schools and staff who know how to use them, he said.

“My son was lucky and we are lucky that everything worked,” he said.

Herricks teachers are required to take defibrillator and CPR training every two years, and school district Superintendent Fino Celano recently introduced a training program for administrators. The district also replaced all its defibrillators this year.

But Sanketh’s heart attack was the first any of the seven responders had seen in a student, they said. The incident has increased interest in defibrillator training and raised awareness about the importance of having the devices in schools.

It also formed a bond between the seven who helped out — Lieberman gave them all a charm with a Helen Keller quote that reads, “Alone, we can do so little; together, we can do so much.”

Sanketh said he feels a connection with them, too.

“It just helps me feel safer knowing that I can come here without any risks,” Sanketh said.

Teachers and friends visited Sanketh in the hospital and kept him posted on what was going on at school, he said. Lots of students stopped by the gym to ask how he was doing the day the incident happened, Friess said.

Teachers said he was asking for homework to do after just a few days.