The LAX Community: A Glimpse into Safety Measures

The Legacy of a Stopped Heart 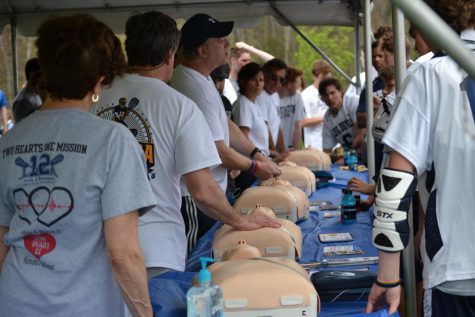 Lacrosse is the fastest growing sport in America, and millions of players strap on their helmets and grab their sticks to participate in organized lacrosse every year. However, the game has changed greatly as it has grown. The sport (as well as all other sports) has become much safer over the years, particularly on the high school level. Unfortunately, these safety reforms come at the cost of the life of a boy named Louis Acompora, a lacrosse player who died playing the game he loved.

The foundation has also led to several other life-saving programs, such as Anyone Can Save A Life. According to their official website, with this program, all teachers and coaches are required to have AED and CPR training for after-school sports practices and sporting events. In addition to Anyone Can Save A Life, the foundation has led to increased heart screenings in New York to detect cardiovascular conditions and reduce sudden cardiac arrest deaths.

Mr. Taylor, a teacher at Patchogue-Medford High School and lacrosse coach at Shoreham Wading River, stated that as a result of Louis’ foundation, “the awareness of the potential dangers of the game resonated loudly throughout the nation.” He added, “College teams, public schools and private schools all were now taking a hard look at policies and procedures. Even lacrosse manufacturers started immediately redesigning equipment to address potential dangers.” Louis’ story is incredibly unfortunate, but the tragedy that occurred in March of 2000 has led to a large step in preventing similar tragedies from ever taking place again.

Louis’ foundation is saving more and more lives every year, and his story is still entirely relevant in the world of sports today. Lukas Peregoy, a junior defenseman on Patchogue-Medford High School’s Varsity Lacrosse team, has been playing lacrosse since he was in fifth grade. When asked for his opinion regarding Louis’ story, he responded, “I think what happened is horrible and we can only benefit from the implementation of AEDs.” Lukas, like a large portion of lacrosse players, was already aware of Louis’ story and the tragedy that occurred. The story’s impact has resonated throughout the athletic community for seventeen years and still exists as a horrifying reminder of what could go wrong without the necessary tools to ensure the survival of a person in need of immediate resuscitation.

On behalf of the foundation, Louis’ mother, Karen Acompora stated: “The Louis J. Acompora Memorial Foundation has crossed many hurdles in the journey to save lives from sudden cardiac arrest. We have been inspired by the lives that have been saved because of the work of the foundation. We do realize that there are challenges that still need to be faced but we will continue to fight every day to meet those challenges and make a difference in the goal to eliminate sudden cardiac death.” The impact this foundation has had on the lives of so many people is not something that can be measured. Countless lives have been saved as a result of the hard work done to eliminate death as a result of sudden cardiac arrest. It is truly horrific to think about the tragedy faced by Louis and his family, but there is no doubt that Louis would be very proud to see the significance he continues to have on the lacrosse world, as well as on the countless lives he will continue to save.