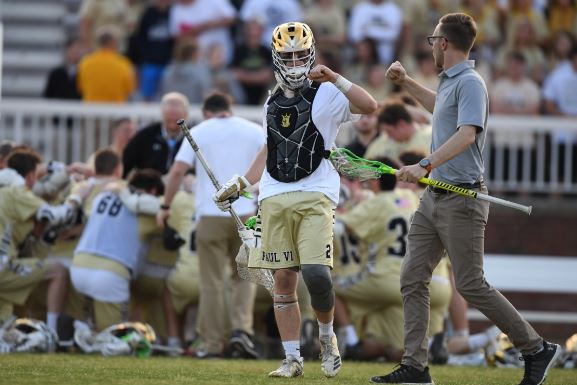 US Lacrosse has been committed to expanding and elevating safety initiatives in lacrosse since its inception in 1998, and has funded more than $1 million in health-related research to improve the well being of lacrosse participants at all levels of play.

Primary in that endeavor has been the organization’s commitment to the study, understanding and prevention of commotio cordis, a type of sudden cardiac arrest caused by a blunt blow to the area of the chest directly over the heart occurring during a precise moment of heart’s cycle.

Although rare, these incidents often prove fatal. In the 15-year period from 1996-2010, more than 200 athletes died as a result of commotio cordis, according to research conducted by Dr. Barry Maron of the Minneapolis Heart Institute Foundation. Eleven of them were lacrosse players, including the high-profile deaths of Louis Acompora, a 14-year-old from Long Island who collapsed on the field in 2000, and George Boiardi, the former Cornell goalie who was struck in the chest with the ball during a 2004 game against Binghamton and died shortly thereafter.

Thanks to research funded in part by US Lacrosse (and largely by the Louis J. Acompora Foundation), scientists have been able to pinpoint the exact cause and timing of commotio cordis and the threshold required to prevent it. Testing by Dr. Mark Link, a board-certified cardiac electrophysiologist and worldwide authority on commotio cordis, led to the passage of a NOCSAE chest protector standard in January 2017.

Starting in 2021, all goalie chest protectors must meet the NOCSAE standard, per rules changes issued recently by US Lacrosse and the NFHS. US Lacrosse is taking it a step further in 2022, when all field players in boys’ lacrosse will be required to wear protection for commotio cordis that meets the standard. The delayed timeframe will allow equipment manufacturers to develop these products and test them against the standard.

“Mandating the use of chest protection that meets the performance standard will make lacrosse safer,” Link said. “This is simply another step in US Lacrosse’s established history of being focused on player safety.”

Article Courtesy Of US Lacrosse Magazine