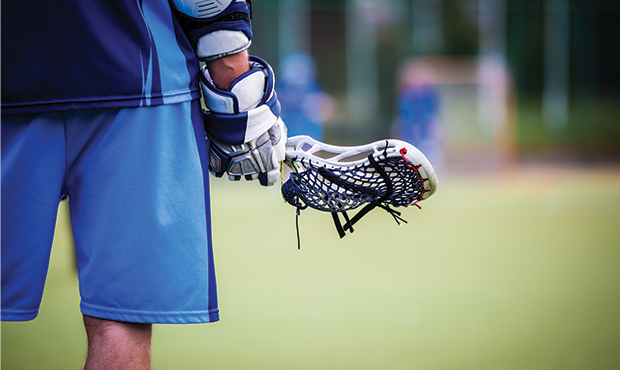 The solid rubber ball Louis Acompora blocked with his chest during his first high school lacrosse game was part of the sport the 14-year-old had been playing since the second grade.

The shot was routine, coming in level to his chest, and so like most goalies, if he could not stop with his stick, he would use his chest to stop the ball from entering the net.

And that was it.

He stumbled and collapsed. The captain and goalie of the Northport High School, N.Y., freshman lacrosse team didn’t make it off the field alive despite the trainers and coaches rushing over to administer CPR.

It didn’t have to end that way.

“He could have been saved,” said his mother Karen Acompora.

But he wasn’t. The automated external defibrillator (AED) that could have saved Louis’ life arrived too late, nearly 15 minutes after the blow to his chest.

“I am 100 percent sure our son would be here today if an AED had been present,” Acompora said.

Moving through their grief

The Acompora family changed irreversibly and tragically on March 25, 2000, the day that Louis died. Fast-forward 15 years to May 31, 2015, when Louis would have been celebrating his birthday or, as his mom prefers, in the present tense.

The family turned their grief into a cause.

Karen Acompora and her husband, John, learned all they could about the “arrhythmic event” called commotion cordis that killed their son, which, at the time, was nearly as tough to find as an AED in a public school. They certified in CPR/AED and later so did Louis’ younger sister, Alyssa.

They acted on what they learned, starting locally with the founding of the Louis J. Acompora Memorial Foundation (also called LA12, which is a combination of his initials and the number “12” on his lacrosse jersey).1 The nonprofit LA12 is dedicated to sports safety with a focus on placing AEDs in all public schools.

Family friends, including Louis’ lacrosse coach, rallied to their side, and together they pursued a law mandating AEDs in all New York public schools. The legislation, Louis’ Law, was signed in 2002.

They partnered with the American Heart Association (AHA) to raise public awareness of cardiac conditions and increase the push for mandatory CPR and AED training in public high schools, making it a requirement for graduation.

This past year, the Acomporas had another reason to celebrate in honor of their son.

On Sept. 17, 2015, New York became the 26th state mandating hands-only CPR training as part of public school curriculum. When combined with numbers from the other 25 states, 1.5 million high school students in nearly 50 percent of U.S. public high schools will be trained in CPR every year.

New York law requires the Commissioner of Education to make logistical recommendations to the Board of Regents in regard to requiring high schools to train students in CPR and the use of an AED. Students will be trained using AHA Hands-Only curriculum, and schools may choose from a variety of low-cost and no-cost options that provide hands-only CPR instruction, including programs and personnel from agencies such as the Suffolk County Regional EMS Council (REMSCO), N.Y.

The road has been a long one, Acompora said.

“Advocacy is a job we do every day, and getting something like this passed in a state takes the persistence of advocates,” she said. “It also takes someone in a state’s legislature willing to listen and act.”

The legislation is the perfect step forward, said Tom Lateurele, Chief, Training and Education for the Suffolk County Department of Health Services/EMS Division, which features the largest AHA community training centers in the Suffolk County region.

“The first link in the chain must start immediately, and the more people we can get trained, the better our resuscitation survival rates,” he said. “If this helps—and it certainly will—we’ll take it.”

Lateurele’s office has certified close to a thousand providers for the New York State EMT-B, EMT-I, EMT-CC, and EMT-P certifications through courses sponsored by the Suffolk EMS Division. The division’s full-time staff member, Ellen Komosinski, oversees the training for the AHA Training Center that also provides separate courses for instructor certification. The instructors—there are now more than 200 certified—are available to give CPR instructions anywhere in the region, including high schools that have requested the training for several years prior to the current mandate.

Lateurele said the hands-only CPR required for the high schools is “very popular” nationwide no matter the age of students and takes only about 30 minutes to teach. The method, by AHA instruction, has just two easy steps: If you see a teen or adult suddenly collapse, (1) Call 911 and (2) Push hard and fast in the center of the chest to the beat of the disco song “Stayin’ Alive.”2

Citizen CPR teaches the hands-only method, and in the two years since the program started, volunteers such as DeBono have provided instruction for more than 6,000 residents of Suffolk County.

“The more people know what to do the better it is for the patient and the ability to perhaps bring a person back to leading a very viable life,” said DeBono, an active member of Medford Volunteer Ambulance Inc. for 37 years. “Too often, we respond to a scene where the family or some relative is standing over the patient crying and screaming but not knowing what else to do to assist them.”

DeBono whole-heartedly supports the legislation and has found high school students receptive to learning CPR and—in some cases—motivated by the course.

“The majority thanked me,” she said. “Some even approached me afterward about getting into the medical profession.”

“What better than to start with students?” he said. “It’s a game changer. Think of the number of people one high school student can influence. It’s exponential. The power of this program is tremendous.”

According to the AHA Heart Disease and Stroke Statistics–2014 Update3, more than 1,000 people suffer non-traumatic cardiac arrest outside hospitals—including nearly 30 children—each day in the U.S. Overall survival rates are about 10 percent. Among young victims, the survival rate is about 5 percent.

In addition, according to the AHA:

Hands-only CPR performed by a bystander has been shown to be as effective as conventional CPR (CPR that includes breaths) in the first few minutes of an out-of-hospital sudden cardiac arrest. Provision of conventional CPR may be better than hands-only CPR for certain victims, though, such as infants and children, adults who are found in cardiac arrest, or victims of drowning or collapse due to breathing problems.4

The blunt and non-penetrating crack of the hard lacrosse ball into Louis’ chest profoundly altered the electrical stability of his heart, resulting in cardiac arrest and sudden death from ventricular fibrillation. There was no relation to a genetic abnormality of the heart.

“The coaches thought he was breathing,” Acompora said. “His breathing was agonal, and, at that time, we had no idea what that meant.”

The cause, they later learned, has a name: commotio cordis (agitation of the heart). Although considered a rare event, the impact must occur within a specific 10–30-millisecond portion of the cardiac cycle.5

“This is something we would never expect,” Acompora said. “We had no way of knowing this could happen to him.”

They found they weren’t alone. Commotio cordis is a leading cause of sudden death from cardiac arrest for young, predominantly male athletes with no underlying cardiac disease and the reluctant motivator behind Parent Heart Watch. The national network of parents, families, and their partners is dedicated to reducing SCA in youth through education, advocacy, and action.

Lateurele gives credit to the schools, the Acomporas, and others who have suffered the same loss for the increased awareness of commotio cordis among young athletes.

“These families help so many people by taking up the cause,” he said. “The Acomporas turned their tragedy into saving lives, and they are no less passionate today than they were 15 years ago [when Louis died].”

The advocacy is a godsend, providing the Acomporas a hopeful outlet for their profound grief.

“This has saved our lives,” Acompora said. “We’re able to talk about him every day and introduce him to people from all over the country. He is still very much a part of our family.”